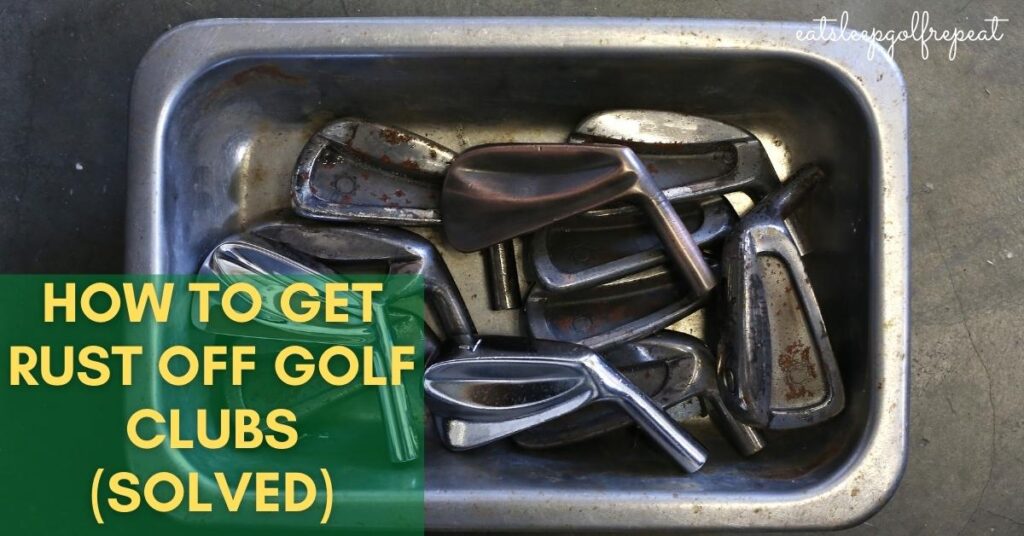 How To Get Rust Off Golf Clubs (Solved)

Your golf clubs are some of your most prized possessions and it’s no secret that they don’t come cheap.

For this reason, it is important to keep them in good nick but there could come a time that they are left exposed to the elements and rust will develop.

But don’t throw your clubs out just yet.

While rust can be a pain to remove, in some cases, it can be done.

In this guide we will be looking at the best way to get rust off golf clubs and restore them to their former glory.

Why Do Golf Clubs Go Rusty?

Golf clubs are made primarily from metal, while there are a variety of different metals used such as steel, titanium, iron and graphite. One of the biggest problems with metal is that it is prone to rust.

Now a lot of modern products that are crafted from metal are treated to ensure that rust has a hard time developing but this doesn’t mean that it won’t ever develop.

Rust is caused when metal is exposed to moisture and oxygen and begins to corrode. This means that if you store your golf clubs somewhere that these two elements are present, there is a chance that they will begin to rust.

Typically, this happens during a long period when the clubs aren’t being used. Perhaps if you take a break from golfing over the winter and put your clubs in the garage, you’ll notice rust has formed when you get them out again in spring.

How To Get Rust Off Golf Clubs

It is possible to remove mild rust from your golf clubs using soap and water but this method might not work for more severe cases.

If you attempt the below methods and find that they don’t work then don’t give up hope just yet.

There are specialist cleaners who may be able to remove the rust for you so be sure to speak to a pro before taking any further action.

At the absolute worst, you may have to admit defeat and discard your golf clubs before investing in a new set.

This time around, you’ll have learned from your mistake and will take better care of the clubs.

If you are unsure of the best way to maintain them, we have a helpful section on that later in this guide.

For now, let’s explore how you can remove more stubborn rust.

To begin, you will need a bucket of warm water and washing up liquid.

Be sure that the water is not too hot as this may do more harm than good.

Pop the clubs into the mixture and leave them for around five minutes.

This may be enough to remove a small amount of rust and when the clubs have finished soaking, all you will need to do is wipe them over with a clean cloth.

If the above method isn’t sufficient then you could try using a couple of bottles of coke.

Yes, while this is a super tasty drink it’s also pretty strong stuff that will take rust right off a metal surface.

You’ll need a few litres of the stuff, the brand doesn’t matter, mixed with equal parts water and the method is similar to using soap and water in that you will need to soak the clubs in the coke for five minutes.

When they have finished soaking, you can take them out and give the rusty areas a good scrub.

Try not to be too rough and depending on where the rust is, you might need to use different cleaning utensils.

For example, using a toothbrush can be useful for getting into grooves and notches.

Afterwards, you will need to ensure that you dry the clubs thoroughly using a soft cloth or leaving them to air dry on a towel.

If the rust is particularly stubborn then you might need to use a product that is designed to remove rust such as a rust remover or acetone.

You’ll need to apply this directly to any affected areas and then brush them to remove the rust.

Be sure not to use anything abrasive that could scuff or scratch the clubs.

Things like wire wool are far too rough for this type of cleaning so you need to use something softer and be patient as it gradually cleans away the rust.

When you have finished cleaning the clubs, you will want to polish the club head and shaft using a dry cloth and polish.

Doing this in a circular motion will yield the best results.

How To Prevent Rust On Golf Clubs

Of course, while it is possible to remove rust from your golf clubs, they say that prevention is better than cure.

If you pay close attention to your clubs and store them properly then the chance of rust appearing becomes much lower.

The first and most obvious thing to point out is that if you store your clubs somewhere that they will be exposed to oxygen and moisture, then you are asking for rust.

So, find a dry place to keep your clubs when they’re not in use.

Keeping them in the house is the best option; and if your other half complains, you just need to point out that the presence of the clubs in the cupboard under the stairs is far preferable to having to fork out for a new set.

Now, when you’re using your golf clubs after rain or first thing in the morning when there is dew on the course, it is inevitable that they will become wet.

This is unavoidable but wiping your clubs down after each use and ensuring that they are fully dry before storing them will help to prevent rust.

Furthermore, you should ensure that you regularly spray rust remover on the club head and shaft.

While this product is designed to remove rust, it can also be used as a way of stopping it from developing in the first place.

That said, there are some products that aren’t suitable for use on certain metals, including golf clubs so be sure to check this before spraying.

You can also use a multipurpose lubricant on the clubs and this only needs to be applied every few months.

This will act as a protective barrier against corrosion and the resulting rust.

When you put your clubs into storage it is vital that you don’t just dump them and forget about them.

Go back at least once a month and check for signs of corrosion.

If you notice anything, you can address the problem sooner rather than later and avoid having to spend hours removing stubborn rust, or at worst, having to replace the clubs.

Seeing rust on your precious golf clubs can be extremely disheartening.

Especially when you are getting them out in the spring after a long break from playing over winter.

But you don’t need to worry as there are plenty of ways to remove rust and get your golf clubs back to their original state.

It is only in very extreme cases that you would need to replace the clubs and using some of the methods we have talked about in this guide will help you to effectively and safely remove rust.

We're an affiliate Just thought you should know we share the sales or other compensations from the links on some of our pages. There is no cost to you. Thank you if you use our links.