When you think of golf, one of the first things that usually springs to mind is a lush green course in the blazing heat – and for many people, this is the reality of the game.

Just think about the vacation courses in the Caribbean and the many UK clubs in the height of summer.

In contrast, there are many around the world whose golfing experience is far different and cold weather is a harsh reality.

This might be in the far reaches of Scotland, Canada and Russia – some of the coldest inhabited countries in the world, during winter, at least.

But even in England, despite the relatively mild winters, there can be a nip in the air, but this needn’t put you off playing.

There is some speculation in the golfing world that winter is one of the best times of year to get your clubs out and go for a round.

But unlike summer, where the game feels much different, there are some things you can do to make golf in the cold much more enjoyable.

In this article, we are going to be looking at how to make the most out of your winter game and looking at some great products, such as hand warmers to keep you toasty on the course. 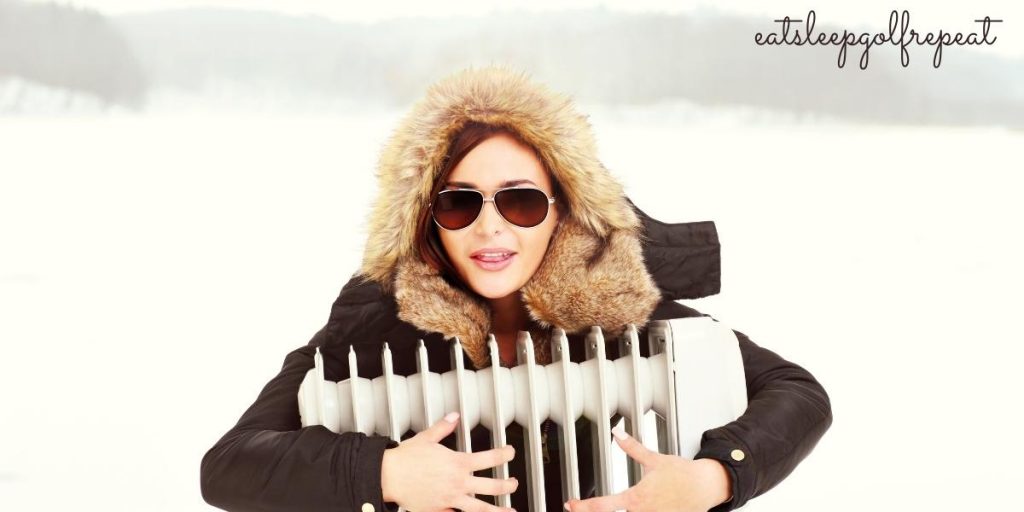 Why Is Playing Golf In Winter Better?

For many reasons, a lot of golfers head for the clubhouse and stay there when the colder weather sets in but there are so many reasons why playing at this time of year can be much more enjoyable.

For example, during the winter months, the courses will be far quieter, and this is far preferable to playing a busy course.

Furthermore, you’ll likely find quite a lot of lucrative deals around this time of year since clubs are looking to maintain their income.

Golfers who don’t want to become rusty – and let’s face it that isn’t hard to do, shouldn’t take a break from the game simply because the sun isn’t shining.

If you want to stay on top of your game, playing all year round is essential.

And of course, who could omit to mention those fresh winter mornings that, whilst chilly, really are good for the soul – and will make you appreciate that warm, after-golf social in the clubhouse.

How To Make The Most Out Of Your Winter Game

It’s no secret that running onto the course wearing your short-sleeved golf shirt and a pair of sunglasses is hardly ideal in winter, so one of the most important things you can do is to dress for the occasion.

Too many golfers are deterred from the course in the colder months thanks to their lack of proper gear, but it isn’t tricky to make the transition.

Buying a pair of hand warmers is a great way to keep things comfortable during the game, and they’re not expensive to pick up.

Gone are the days where you needed gel inserts in your gloves to stay warm, modern technology has provided us with a wealth of rechargeable options that are perfect for golfing mornings.

Take the OCOOPA, for example, that provides up to seven hours of heat and can be recharged up to 500 times – more than enough to last the winter.

If you wanted something a little more high-end, then the Day Wolf Heated Gloves are an excellent alternative.

One of the most unbearable things when playing a game that requires the use of your hands is to be cold, so hand warmers are one of the first things you should think about.

In addition to this, you might also think about other types of appropriate clothing.

This might include thermal base layers, particularly those that have been designed for sportspeople.

They will keep you warm but are also wicked to ensure you stay dry.

Waterproof clothing is essential, and finding good quality gear can mean the difference between a great morning of winter golf and feeling downright miserable.

Let’s look at some more tips for keeping your game at its peak over the winter.

When playing golf it is so important to keep your hands warm, if they get cold it makes holding the golf club so much more difficult and will make the game far more enjoyable.

Golfers who only play in ‘fair weather’ just do not have the right equipment.

Below is a listing of affordable Golf Mitts which will make your game far more pleasurable.

Make The Most Of Walking

In the summer, many golfers take the option to ride from hole to hole, but during the colder months, walking can make all the difference.

Footwear is very important so read our article on Best Golf Shoes For Winter.

Keeping your blood pumping is a sure-fire way to keep you warm; it makes sense to incorporate this into your winter game. We mentioned that many golfers down clubs as soon as the first frost sets in, and even if you have made an active decision to keep playing, it can be easy to veer from this once you’re out there.

But it is important to keep playing since doing so in these conditions will give you a chance to hone your skills and be at the top of your game come spring.

In colder weather, golf balls do not travel as far, and of course, this can have a dramatic effect on the result of each shot.

There is a common understanding that every 10º temperate drop will take as much as two yards of each hit, so it is vital that you maintain a healthy temperature for them.

The most obvious way to do this is by keeping them in your pocket and using your body heat to keep them toasty.

However, those hand warmers we discussed earlier can play a crucial role in helping your balls to stay warm.

Try Out The Driving Range

If you aren’t over-struck at the thought of playing a full game in the rain, sleet or snow, then an afternoon on the driving range can be just as good for keeping your game fresh.

In fact, many golfers often neglect this integral part of their practice, but when things get colder, it is a prime opportunity to work on your swing.

What’s more, many driving ranges are covered so you aren’t exposed to the elements.

If you still aren’t feeling the outdoor practice, there is, of course, the option to go indoors and use a golf simulator.

Whilst this is never going to be a solid alternative to getting outdoors, it does give you the chance to maintain your skills without having to invest in an entire winter wardrobe. Go For A Golf Lesson

Another great way to keep playing once the summer has ended is to enlist in a course of golf lessons.

Couple this with your driving range practise and you’re set to be the best by the time the rest of the hibernating golf players return in the spring.

Be Realistic About What To Expect

Most golfers find that their scoring average is nowhere near as good during the winter, but you shouldn’t let this put you off.

Be prepared for this and go onto the course with realistic expectations.

The cold weather means that your balls will travel less and behave differently and your body isn’t going to be as flexible and agile as it would in the summer.

Factoring these things in and adjusting your goals accordingly will help you to avoid disappointment.

If your time and budget allow, you could, of course, choose to jet off to somewhere warmer and make the most of foreign golf courses while the weather at home is lacking.

Even if you take a couple of weeks out of your winter to try out some of the fantastic courses in far-flung places such as Australia or South Africa.

Florida, where the average December temperature is anywhere between 11º and 22º, has some excellent golf courses for the globetrotting golf enthusiast.

Living in the UK does have its advantages; there are many of the worlds most well-renowned golf courses here. However, on the flip side, the weather isn’t always reliable, even in summer.

Once winter sets in, there is a high chance of frost, snow and a lot of rain.

This can mean that many golfers give up the game over the colder months and return in the spring, feeling a little rusty and potentially overwhelmed.

That being said, there are many ways in which you can continue to enjoy playing from October through to March and still get a lot out of it.

Altering your expectations, investing in some suitable winter clothing like waterproofs and hand warmers and hitting the driving range are all viable options.

Alternatively, if you wanted to treat yourself and get back into the sunshine, you could hop on a plane and head off to warmer climates to enjoy a few rounds. But there’s nothing quite like your home turf.