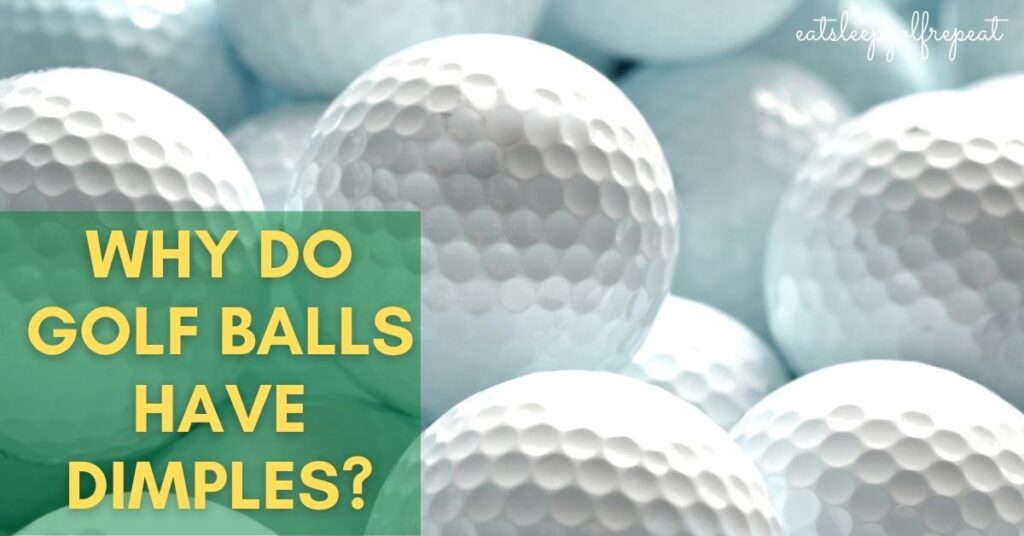 Why Do Golf Balls Have Dimples?

Try to imagine a golf ball without dimples; unless it’s a smooth practice ball then it would look pretty strange, wouldn’t it?

But when you think about it; do the dimples on a golf ball actually have any effect on how it moves or how it plays?

You could be forgiven for thinking that the dimples were there purely as an aesthetically pleasing pattern but this isn’t the case.

Back in the early days of golf, balls were not dimpled and textured in the way that they are now.

If you look at some of the earliest examples of golf balls, you will see that many were completely smooth.

However, as the game developed and more and more people began to understand what features golf equipment needed, balls were suitably adapted.

This discovery came about when golfers began to notice that their old balls, that were covered in nicks and slices appeared to fly much greater distances.

With curiosity eating away at them and a clear desire to be better on the golf course, golfers began favouring their old beaten balls over the new, smooth ones.

It was only a matter of time before this information reached the more sciencey types and inventors and it came to light that the nicks in the balls acted as turbulators.

This means that they induce turbulence in the air that surrounds the ball, therefore reducing drag and improving the distance the ball is able to travel.

The Science Behind Golf Ball Dimples

Did you know that, when you impact a golf ball with your club, this contact takes no more than 1/2000 of a second?

That’s incredibly fast but in that minute amount of time, the launch angle, spin rate and velocity are all established and this is something that scientists and engineers find extremely interesting; that’s why they’ve spent a long time studying it.

Once this very brief impact has taken place, the trajectory of the ball is now only affected by aerodynamics and good old gravity.

You can stand there shouting and cursing in the hope that the ball will do what you want it to but once you’ve hit it off the tee, you’ve lost control of what happens from hereon in.

Since the dimple pattern plays a very significant role in aerodynamics, this is something that is very closely studied and applied in the manufacture of golf balls.

Even the best golfer in the world wouldn’t be able to hit a smooth ball anywhere near as far as they could hit a dimpled ball.

In fact, it is widely accepted that even tour pros would only manage to get a smooth ball about half as far as a regular, dimpled ball.

The design and depth of the dimples plays a very important role in the overall performance of the ball and it might surprise you to know that each dimple is only 0.010 inch; small but incredibly effective!

When it comes to the forces of lift and drag on a golf ball, the dimple depth is critical as just the most minute change could alter the trajectory of the ball dramatically as well as decreasing (or increasing) how far it can fly.

But it isn’t only the depth that has to be taken into account; there is also great importance when it comes to the shape.

Traditionally, the dimples on a golf ball are spherical but it has now been noted that other shapes might further improve the performance and Callaway has taken advantage of this aerodynamic improvement and uses hexagons for some of its balls.

But all this talk of aerodynamics might be enough to give you a headache.

Unless you’re already clued up on the science behind it all, it is a little overwhelming, so let’s try and simplify what’s happening as the ball goes into play.

When an object moves through air, that air puts a force onto it.

Imagine sticking your arm out of the car window while it is moving, you can imagine the force and sensation that you feel.

This is the same as the force on a golf ball as it flies through the air.

When you look at things in the same way that an aerodynamicist would, you must take two factors into consideration; drag and lift.

Drag refers to what is trying to stop or counteract motion whereas lift refers to a force that moves perpendicularly to the motion. In the case of a golf ball this is usually an upwards force.

At the front of a golf ball, or indeed any object that moves through air, there is an area of high pressure.

This is where the air initially hits the ball and after this, it moves smoothly around the sides of the ball before moving off the back. But much more than this, as the ball flies through the air, it leaves behind it a turbulent area where airflow is not uniform and is somewhat agitated.

This means that behind the ball, the pressure is slightly lower.

The size of this low pressure area determines how much drag is on the ball and this is where dimples come in.

You see, when dimples are applied to a golf ball they limit how much turbulent air remains behind the ball and this means that as the air moves around the sides of the ball, it goes a little further around the back making the low pressure area smaller.

What does this do?

It reduces the drag allowing the ball to travel further. In fact, if we go back to our previous point about pro golfers being able to hit a dimpled ball twice as far as a smooth ball, this demonstrates the theory perfectly.

But it isn’t only drag that is affected by those seemingly insignificant dimples. Lift is also affected.

If this is hit into the air with backspin then lift is created as a result of warped airflow in a similar way that a wing on an aeroplane works.

Where the golf ball is concerned, that spin increased the air pressure on the lower part of the ball sending it further up.

It may come as a surprise to learn that as much as half of the lift of a golf ball can be attributed to this upward force created by spin.

So, where does the other half come from?

You guessed it; the dimples!

What Happens If You Take The Dimples Away?

While they might look like simple pieces of equipment to the untrained eye, golf balls are manufactured in such a way that they are perfect for their use.

They are made up of several different aspects, each with its own important role to play in the overall performance of the ball.

It would be unwise to say that any of these aspects were more important than the next but in this article, we are talking about dimples, so that is where we will place our focus.

As we have already discovered, if you alter the dimples depth by even the smallest amount, this will throw the aerodynamics of the ball off so much that it might become unusable.

Or at least, you wouldn’t get the best performance out of it. Once that ball has left the club face, those tiny dimples determine the speed, rotation and throw of the ball.

If you remove the dimples from a ball then everything that we just discussed in the previous section becomes obsolete.

The aerodynamics of the ball will not be optimised for it to have the perfect spin and flight, therefore reducing how far you can hit it.

Golf balls need to have dimples in order to improve their flight, so they do not slice or hook.

The science of aerodynamics is complex but it certainly explains how those small bumps and notches on your golf ball can improve its performance and therefore, how well you play.

If you are interested we have also written about why golf balls have numbers.